Outlined below is a brief review of the Volkswagen Transporter T4 including key features, specs and more.  Professional camper van conversions from companies such as Westfalia and Winnebago are discussed and various US models are listed as well. 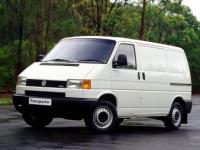 The Transporter T4 was landmark for Volkswagen in that it was the first time the engine was water cooled and front mounted which would become the standard for future models. The T4 was available as a 4, 5 or 5 door van as well as a 2, 3 or 4 door pickup in the following body types.

The only major design change over the 13 year production run was in 1996 when a longer front end was brought to market in order to fit a larger six cylinder VR6 engine. These are referred to as long nose or T4b while the original short nose versions are known as T4a.

While the standard Eurovan passenger models only sold one year (1993) in the US due to lack of interest, the camper van variations were and still are highly popular with RV enthusiasts. Despite the discontinuation in the US, sales continued in Canada and Mexico.

VW reintroduced the Eurovan including the MV Weekender a Westfalia conversion featuring a pop-top roof and overhead bed among other camper features for model year 1999 to the US. Because of the import gap, 1994-1998 Eurovans are rare in the US. The exception is the Eurovan Camper brought to the USA and Canada by Winnebago in 1995 which featured a longer wheelbase and small pop top camper.

Listed below are the various stock Volkswagen Transporter T4 Models as well as factory campers and 3rd party campervan conversions.

Anything else to add?  Let us know in the comments section below…

Use the search box above for specific features and other specifics. Browse by model year or by camper location.

This site is designed as a resource for owners to list their Volkswagen Transporter (T4) Eurovan Campers for sale. This service is free.